A graduate of Wyoming Valley West High School in Plymouth, Duda starred in football in high school. In 1979, he was awarded a full sports (football) scholarship to the University of Maryland, and enrolled in the General Studies Degree Program. In 1983, he was drafted into the National Football League by the St. Louis/Phoenix Football Cardinals and withdrew before completing my degree. He was selected to the All-Atlantic Coast Conference; Coaches All-American Second Team; All ACC Player of the Week vs. North Carolina State and North Carolina; Starting Defensive Lineman, East-West Shrine Bowl, Palo Alto, California; Aloha Bowl, Honolulu, Hawaii; Tangerine Bowl, Orlando, Florida; All-American Strength Team; Strongest Terp Award; University of Maryland Career Sack Record Holder.

He was chosen in the fourth round of the 1983 National Football League draft. Mark started seven games at defensive tackle as a rookie, received three game balls vs. Washington, Dallas, and New Orleans. In 1985 he was second on the team with 7.5 quarterback sacks, and led the defensive line in tackles. Following his retirement from professional football in 1988, he returned to college at East Stroudsburg University in East Stroudsburg, Pennsylvania.

In May, 1991, he acquired a B.S. in Physical Education (Pedagogy Concentration), graduating cum laude. He is presently enrolled in the School Counseling graduate degree program at the University of Scranton, Scranton, Pennsylvania. Mark was a defensive line coach for two years at East Stroudsburg University, and spent one year as defensive coordinator for one of the Wilkes-Barre high schools, Meyers, before coming to Lackawanna Junior College. He was appointed enrollment advisor and head football coach at Lackawanna Junior College in March, 1994, after a year as the college’s assistant football coach and defensive coordinator. He was working in the enrollment management office at the time of his appointment.

In 1994, in his debut as Lackawanna Junior College’s head football coach, Duda led the Falcons to the Seaboard Conference Championship, an appearance in the country’s most prestigious junior college football bowl, the Midwest Bowl, and a 9-2 record. Duda was inducted into the University of Maryland Wall of Fame in April, 1994. He is currently the Head football coach at Lackawanna College. "Sam" became one of our finest "Ambassadors of American Sports" while competing on the international circuit. While in high school, won varsity letters each in cross country and track and field, set school record in long jump, began lifting weights as an 85 pound 9th grader. While competing for York Barbell he advanced through seven classes to the heavyweight division and was 4-time National Collegiate Champion. 4-time All American (1969-70-71-72). Voted Outstanding Collegiate Lifter twice, holding records in 3 categories. A 2-time National AAU Champion, 5-time Pennsylvania State Champion 3-time All Army World Wide Gold Medalist. 1973 Pan American Champion and in 1976 a member of the US Olympic Team competing in Montreal. "Jack" lived to play football. "Was in his blood!" achieved celebrity status at all levels of competition at Pottstown High School lettered 3 years in football and baseball .. .in addition to All League Honors, was presented the coveted Maxwell Club Award as Player-of-the-Year ... recruited by Salem
College, continued to amass almost incredible statistics ... ranked 1st nationally in rushing, 3rd in scoring, 4th in punt returns and 1st in kick-off returns .. .in 1975 and 1976, selected to the NAIA All American Team .. .Sportswriters Association named him West Virginia's Amateur Athlete of the year ('76) ... drafted by the NFL Pittsburgh Steelers where he earned a super Bowl XIII Championship Ring ... after a short stint with George Kalas' Chicago Bears, he returned to the Steelers ... a serious injury forced "Jack" to terminate a colorful career. Back in 1928, "Pete" was recognized as Pennsylvania's finest high school athlete ... while at Picture Rocks High School, pitched on the town's baseball team and won a medal at the Penn Relays ... after receiving an athletic scholarship to Bucknell University, earned letters in football, basketball, baseball and track. .. an outstanding punter, passed for one touchdown, ran for another, then kicked the winning extra point in a major upset beating Fordham's famed "Seven Blocks of Granite" in the final game of Bucknell's first undefeated season ... played professional football for the Staten Island Stapes (NY) before starting a career in education ... at Salem High School (NJ) "Pete" coached football, basketball and track. 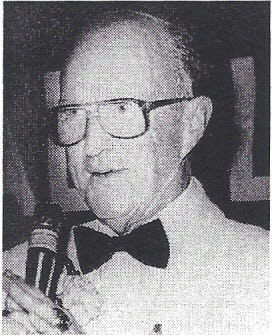 "Maje" has been an active member of the Phillies National League Baseball Organization for 6 decades ... 10 years as a coach "firing up" Eddie Sawyer's Whiz Kids rooting for Robbie and Curt in the 1950 World Series currently doing community relations work for the ball club ... played high school baseball and basketball at Northeast ... was the playmaker on Villanova University basketball powerhouses ... captained both high school and college teams ... helped to co-pitch a Villonova no-hitter coached Villanova basketball freshmen to a two-year record of 116 wins-21 losses guided Chestnut Hill Academy to 2 baseball championships ... a Phillies Dream Week Instructor ... holds the unique distinction of being a coach both in a World Series and a NCAA Basketball Tournament. .. WWII Veteran, Bronze Star, Combat Infantry Badge, 5 Battle Stars. "Skip", in the mid-40's, was one of the premier running backs in the nation ... a double-threat All American tailback and passer for George Munger's powerful University of Pennsylvania single-wing offense and an All American halfback at the U.S. Naval Academy ... both teams were nationally ranked ... played professional football in the NFL as a safety for the NY Giants ... following retirement as a player became noted college football official working major games including Army-Navy, Sugar Bowl, and Hall of Fame Bowl among others ... past president of Eastern Association of Intercollegiate Football Officials ... Trustee and member of the Executive Committee of the Univer- sity of Pennsylvania Health Systems ... very active in assuming major responsibility positions in community government .. .inducted into College Football Hall of Fame. Very few basketball coaches can match the varied accomplishments of "Speedy" ... so far, a head coaching record of 608 wins-208 losses ... SO tournament wins including league titles at four programs .. .is one of only four coaches in Division I to win 100 games in the first four years of NCAA coaching ... winningest coach in Roman Catholic high School history with a
347-82 record ... championship teams at Penn Charter ... as LaSalle University's women's coach, the best winning percentage (71.70/0) in the program's history .. .in 9 seasons as LaSalle's men's coach, compiled 164 wins playing in 4 NCAA and
2 NIT tournaments, again winningest ever ... 1989 team, 30-2, ranked 12th in Division I National Ratings, .. because of his intense community involvement and human goodness, "Speedy" has become a source of immense community pride! On three levels, "Fett" has earned the reputation of being one of Philadelphia's all-time finest as an athlete, coach and administrator ... she starred at Swarthmore High School under coach Virginia Allen ... then at Temple University, guided by coach Ann Volp, became a 10-time U.S. First Team Lacrosse All-American and a 3-time U.S. First Team Hockey All American with International Competition and Honors in both sports ... coached basketball and lacrosse at Drexel 10 years ... coached lacrosse at Beaver College 3 years ... returned to Drexel (1965) as Director of Athletics/Physical Education for Women and coached lacrosse and badminton until the late 1970's a National official in both basketball and lacrosse ... sectional official in hockey retired (1991) rank of Full Professor along with husband, John, Director of Athletics/Physical Education for Men at Drexel. John is one of Pennsylvania's most honored schoolboy basketball coaches ... to those whose careers and lives he personally touched, he was known simply as "The Coach" ... a fiery perfectionist and brilliant defensive tactician whether playing basketball (All Schofield Army Base twice; Penn State 1939-42) or coaching basketball (Kutztown High 1947-65, 1986-87; Delaware Valley College 1966-75; Wilson High 1976-79), with a career record 527 wins - 117 losses (.818 winning
percentage) including 16 Division, 13 County, 8 District III and 3 Pennsylvania Class B State Titles ... developed 28 Berks All Stars, 8 All State and 1 "Parade" All American players ... a player stated at the time of his coach's death, "He took you from being a kid to being a man:' ... "When you were out there on the court, he was teaching you life. He told you life was never going to be easy, but if you stuck to it and worked hard, you could succeed:' Membership - all membership is through our local chapters. If you are a sports-minded ...
END_OF_DOCUMENT_TOKEN_TO_BE_REPLACED